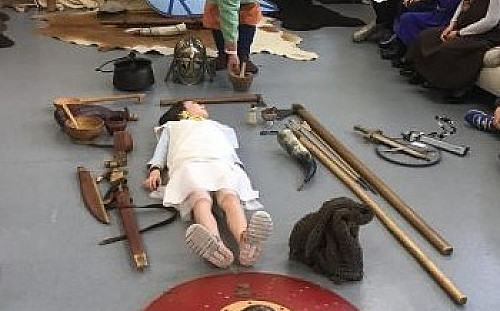 Year 4 had a wonderfully exciting Anglo Saxon workshop this half term.  It started with a frightening attack by a sword wielding warrior and then progressed on to us understanding why the Angle and Saxon tribes came to Britain, where they came from and details of how they lived. We discovered that although they were not literate and little written record of their time remains, they were master craftsmen creating jewellery, clothing and artefacts that would be difficult to replicate today.  We found out about what they ate and the clothes they wore and how these marked out people’s status in the tribe.  We also found out that they had slaves which surprised us but made us feel sad about an individual’s loss of liberty.

We also recreated the burial chamber of King Redwald from Sutton Hoo and from the wealth and enormity of the treasures understood his importance to his people.  The treasures were to help him on his journey too and time in Valhalla.